Look at this latest step for Nesbeth on his the road to victory.  ˜Taste Victory' is his first single off his recently released EP titled "Victory" for the UK based Entertainment Soul label. The song chants hope for the future, while
reminiscing on the harsh past.

The video stylishly portrays the theme of the single by depicting the reggae star as a boxer, who is staged in the ring to battle with his negative past self. The star is victorious and the sweet melodic chorus is sung over & over again, "now I can taste victory".

The video is currently garnering exposure from numerous media outlets and most recently was picked up by MTV Iggy. MTV Iggy is a division of Viacom Media Networks, focused on bringing cutting -edge global music and pop culture to the U.S. "Taste Victory" video can be seen on MTV Iggy and has received quite a few hits since its post on the site several days ago.

Directed by Jamaican music video specialist RD Studios, it is the artist himself who is credited with the visual concept. "I wanted to portray to those that live with self doubt, that personal achievement is often only held back by this negative internal struggle and that it must be overcome to fully flourish" said Nesbeth.

On the subject of the video getting picked up by world famous station he continued "It is an honor to have my video apart of the brand MTV Iggy and among a diverse group of musicians. I see this as an opportunity receive exposure to a new audience and gain new fans".

Nesbeth is currently promoting his EP "Victory", which has just received a stellar review from prominent website Reggaeville, and look forward to his upcoming performance on Rebel Salute! 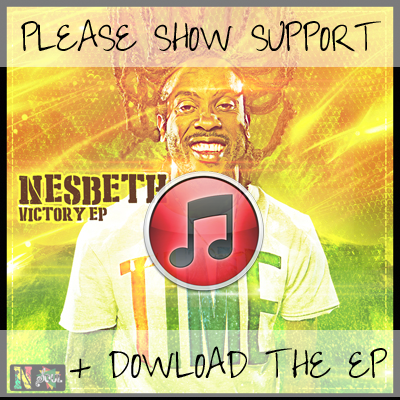 Although it may feel as if the conscious reggae star took a musical hiatus, Nesbeth has steadily continued his musical journey by drawing from life and penning an arsenal of new music. Recently signing with the London based label Entertainment Soul, Nesbeth is feeling revitalized and ready to share himself through his music with the world. “I see the songs as parts of my body, each song plays a significant role”

Delighted on the creative control given to him by his new label, the “Victory” EP represents a more mature side of Nesbeth. When recording "Victory" it is evident Nesbeth was on a mission to uplift the people and assist listeners to find a sense of motivation and perseverance through his music. On this 5 track EP each single has a special message, the lead single "Taste Victory" is an inspiring single that many can relate when feeling like they have hit rock bottom yet, is able to taste that victorious day approaching.

The fourth track (and instant ‘gratification’ track for buyers of the iTunes pre-order 4th Nov) “Hundu Lay Lay” gives you a warm & soulful feel of Africa with it’s uplifting tribal drum and vocal rhythms. But it speaks of trouble in the land and enormous strength among it’s people, drawing eerie echoes of current affairs, whilst Nesbeth chants "Hundu Lay Lay", throughout the chorus.

A joint collaboration from some of reggae music prominent producers, Nesbeth also took on a role as producer while recording his "Victory" EP. In conjunction with M.Shaw, Nesbeth wrote the five tracks each showing a different style. The EP was proudly produced by DJ Frass (Taste Victory), Merrick Shaw (Even Though)and Nesbeth himself. Nesbeth hopes that his musical message will be heard and shared.   “I want to make music that will stand the test of time. With Victory I want to anoint the oppressor and the oppressed. I hope all these songs reach out, to the masses and inspire the nation to strive for their victory.
Word sound is power.”   Distributed by Zojak Worlwide, "Victory" EP will be available on all digital platforms on Monday November 17th, 2014. iTunes preorder available Tuesday November 4th, 2014.

To register for tickets please email or call Street Cred Jamaica, details on the invite below.

SSignal Productions prides itself on crafting a fusion of sounds that is representative of the diversity in Guyanese culture, and thus, its music. Blending R&B with reggae, pop, chutney, soca, dancehall, jazz, rock, rhythm poetry and Guyanese folk has served up numerous hits for the team, over the years. Many of those influences are evident on Higher Level, offering up an eclectic group of entertainers and making this alluring and aptly named compilation a memorable album, and a keeper, for all music fans.

Renowned for his socially-conscious musical messages, Reggae star Natural Black is gearing up for the July 8th release of his 14th full length studio album titled "No Prejudice".

Laying his distinctively smooth, mellow voice on 15 tracks, the album spans the spectrum of all that embodies reggae, from Culture, Ska, Lovers Rock, Social Commentaries, Dancehall and even an underlying gospel vibe. Natural Black has delivered what is sure to become a classic album.

The title name speaks for itself, "No Prejudice", it exemplifies Natural Black's mind set of No Prejudice, that it's all love and that we should all show love to one another. The songs "Love Got A Way, Searching, Special Girl, Don't Play With My Heart, Give Me Your Love" and "Feelings" which features M'Deon, are all lovers rock that are sure to quench the soul, mind and body of lover' throughout the globe. While "This Will Be Over, Rolling On, No More, Africa Awaits" and "When Last" are universal and reflects of our past, present and future. "Just Got Paid" gives off a Ska Vibe, the feeling of wanting to let loose and have fun after a hard working week, when one is ready to go out and full joy the fruit of your labor. "Gimme Di Trees" is an uptempo track that will resonate to dancehall fans. Rounding up this musical feast is "I'm On My Way", an ever day music moment, inspirational with a gospel vibe.

"No Prejudice" will be available July 8, 2014 on ITunes, Amazon, Google Play and all other digital distribution outlets.