About Jahvillani: Jahvillani is one of the most widely recognizable faces in younger-generation Dancehall.  Repping Ocho Rios on the North Coast of Jamaica, the Wile $ide Government Boss has consistently delivered songs that are appealing to ladies balanced by a catalog of songs that depict life in his environment. Born Dujon Edwards, the artist hails from Ocho Rios, a city that sits in St. Ann, a parish on Jamaica’s northern coast. He graduated Ocho Rios High School where as a student, he started writing verses and became a campus favorite after three energetic performances. Naturally he transitioned to recording and pursuing music full time. He decided that he would perform under the moniker “Jahvillani,” a name forged through thinking about balance. Says the artist, “The name Jahvillani is a portmanteau, one that was deeply inspired by my views of society. ‘Jah,’ which means God in Rastafarianism, symbolizes the good in society and the good that is hopefully in everyone. While ‘villani’ is a creative twist on villain which speaks to the evil in society. Together it makes Jahvillani: the Wile $ide Gad who makes positive vibes, but also comments on the negatives in society, through his music.”

13TH Annual BEST OF THE BEST Friday may 24.2019  and right after that date is the Best Of the Best memorial Day Weekend Sun.May 26.2019 Music fest With live Performance ShaBBA Ranks .Super Cat Alkaline.Jahmel Stylo G.BushMan and many more Artist At

Early Bird 2 Tickets Ends Midnight on Saturday for all Events

Early Bird 2 Tickets Ends Midnight on Saturday for all Events

Reggae Sumfest’s week-long takeover begins Sun. July 15, 2018
with a variety of action-packed pre-and-post events.
Below is a list of the festivities.

Jamaica’s annual music festival adds more flavor to the mix with Stefflon Don and Safaree
The two artists will both perform at Sumfest’s Blitz
“All Black” pre-party on Wednesday (Jul 18).
Safaree will also host the event.


This is one of the many back-to-back themed parties leading up to the 2-day iconic concert on July 20-21 held in Montego Bay. 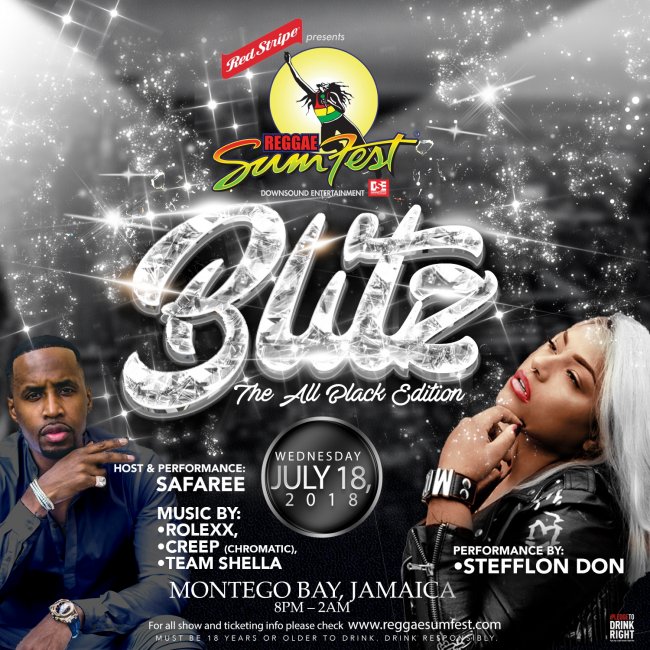 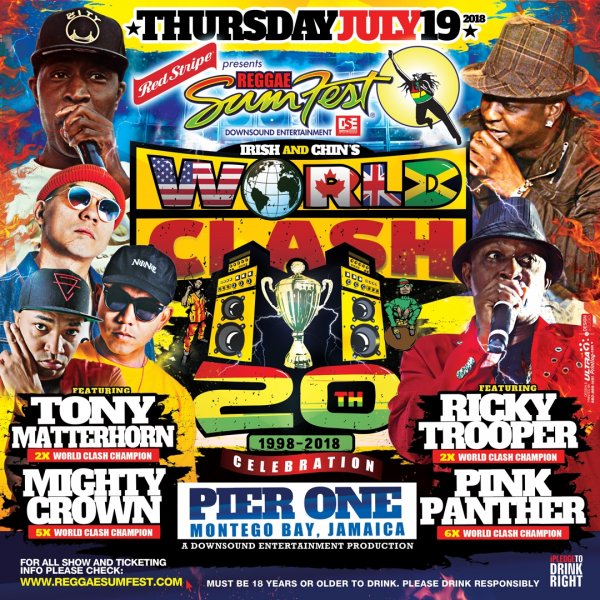 Downsound Entertainment and Reggae Sumfest are bringing back Irish & Chin’s World Clash
for a 20th Anniversary Celebration to Montego Bay, which represents an historic moment in Jamaican Music History.
For a decade, between 2001 and 2010, fans were blown away by the sounds and over-the-top performances staged
by Irish & Chin with their Montego Bay…presenting the very best Sound Systems in the World in fierce competition.


Early-bird Tickets to Irish & Chin’s World Clash Event,
as well as tickets to all the other Reggae Sumfest events are available
on the ticket link.

Get your Early Bird Tickets now

The tickets are in limited allotments, so fans are encouraged
to purchase tickets NOW for their favorite events.
Weekend and All Week tickets available. Order yours today.

18 & Over To Drink ~ Please Drink Responsibly